What We've Been Doing

I had a fun week! My parents, brother, sister-in-law and their kids all came up to visit and we had such a great time!

We took the kids to Galaxyland at West Ed and rode all of the little kids rides, which was a blast. 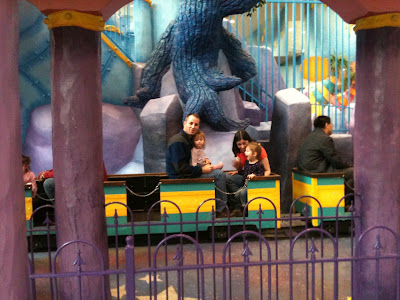 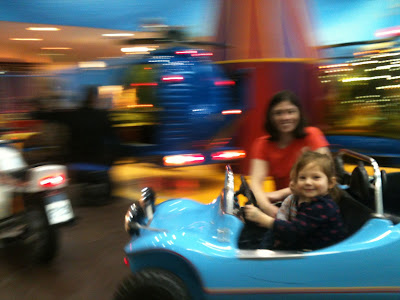 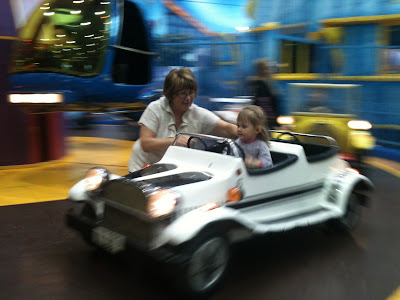 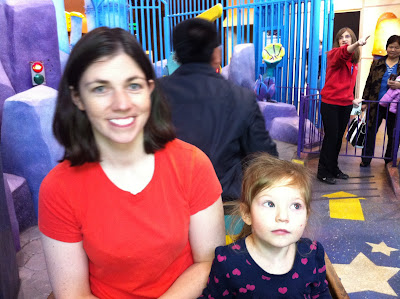 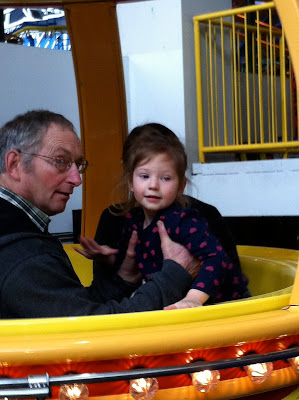 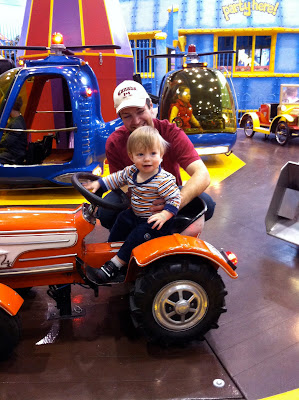 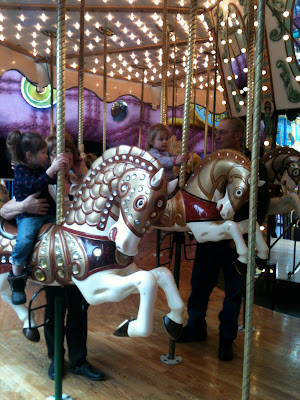 We did a little pre-Black Friday shopping.
We watched the seal show, which was even more impressive than usual. 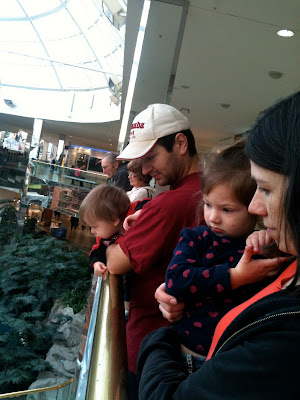 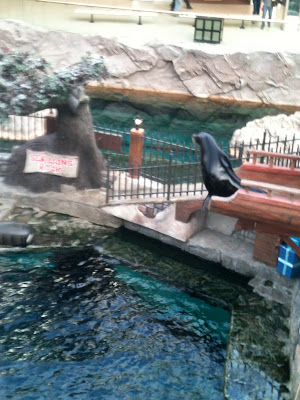 We also booked a family vacation to Jamaica!! Yay!! I can't wait. 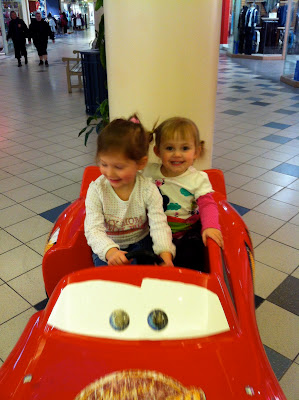 This is what the girls were doing while we did the paperwork!

Mom, Brandi and I went to the Moscow Ballet's performance of Romeo and Juliet, which I loved. There were some nude coloured tights that just shouldn't be allowed, but they were impressive dancers, especially Juliet.

Everyone else had to head home, but my mom stayed and we had a fabulous weekend of shopping, scrapbooking, eating, movies and visiting. It was very fun! I think we literally shopped until we dropped.

Also, I've been catching up on some of my 'Kelly' outings, which I missed while Brad was away. I've been to book club meetings, dance classes and craft sales, all by myself. (Okay, I met friends, but I went without a stroller, a purse full of snacks, and a nose picking two-year-old). ***on a side-note, this really throws me... I was prepared for most things, but the nose-picking phase was horrible. I think it ended when her cold went away, but I see potential for it to return, and I'm not happy.***

Plus, I got the fridge, freezer and floors cleaned, got my hair cut and dyed and got some signs finished for some orders I got from our sale!

I'm pretty pleased with myself.

Here's a glimpse of my new hair, and more importantly, the kids in action:

These are all phone pictures and videos, so they're not the best, but they make me happy!


Posted by The Savvy Scrapbooker at 7:12 PM No comments:

I haven't posted again, but I thought I'd post some of the funny things Gracie's been doing lately. Mostly so I remember them.... but you may enjoy them, too!

I asked Gracie what a goose says, and she thought about it for a minute and said, "beep, beep?" I laughed, and said, "No, they say 'honk, honk', but that was close!"

When we were in Ottawa, she heard noises outside the hotel room door and thought someone was coming in. She came racing over to me yelling, "I'm a scaredy-cat, I'm a scaredy-cat!"

When we were in the car, I overheard Gracie say quietly, " A dinosaur riding a bike... huh." We were passing a young boy riding a bike, wearing a full face bike helmet.

When we were in the grocery store, at the till, Gracie presented me with a chocolate bar that she wanted, I said no, and was busy unloading groceries. When I turned around again, she had it in her mouth, and said. "I'm a puppy,"so I added it to the rest of my groceries.... (but never let her have it.)

At the end of a long day, I had to move her playpen to another house before putting her to bed. As I was collapsing it, Gracie started to cry and yelled, "No! My bed!"

That same night, I thanked Gracie for being a good girl that day, because it was long, and she wasn't feeling good, and she had to sit in a restaurant for a long time. She replied, "And, I was sick." because she knew that made it even harder to be good.

She ate a good supper one night, so I gave her a little bowl of pudding. She couldn't finish it, so I suggested she give it to her dad. She turned and smiled at him, and then turned back to me and mouthed "no."

One evening, after getting out of the bath, she ran through the house naked, singing, "pee, pee, pee" and squatting periodically, as if she was going to pee. I had no idea what she was doing, so raced to get her and asked her if she had to go pee. "Nope, just singing the pee song," was her reply.

I was taking leftovers out of the fridge and had the door open. I turned around for a second, turned back and she was standing on the second shelf on the door, trying to reach her milk. I scooped her off and told her she couldn't climb the fridge door. She threw her arms up in the air and stated matter-of-factly, "but I can't reach!"

Every day when Brad gets home from work, she makes him empty his pockets of any change he may have so she can add it to her purse.

Okay, those are the stories I can think of today. Needless to say, she's hilarious and life is interesting at our house these days!
Posted by The Savvy Scrapbooker at 2:48 PM No comments:

That was a long break! Sorry. I'm back to a semi-normal schedule and loving it.

Brad was gone for 2 months, and I've completed a breakdown of what those two months looked like for Gracie and I:

14 car trips over 3 hours
2 four hour flights
12 days in a hotel
4 illnesses, 3 of them were Miss Gracie
58 days (approximately) of sleepless nights. Gracie decided if Brad wasn't here, she couldn't sleep through the night, I guess.
1 Halloween orphan (again, G, as Brad was gone and I was on death's door with the flu - luckily Grandma Gay was there to take her trick or treating)
1 craft sale which I was supposed to make things for (but I didn't have much time) and I was supposed to help out at (but G was sick, so that didn't work).

And that all equals two pretty excited people when Brad got home last weekend.

So, this is why I haven't been posting. That and I still can't find my camera. 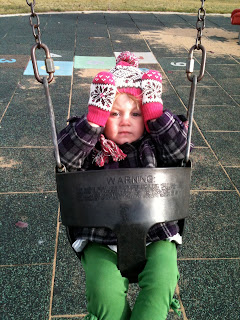 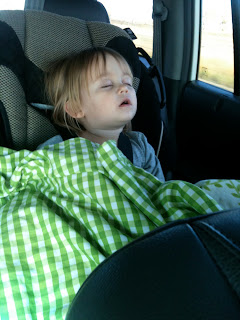 But an excellent car napper, 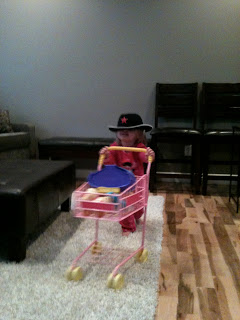 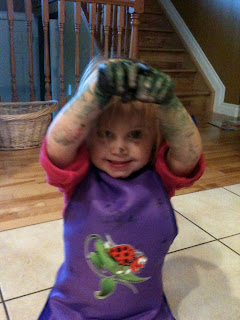 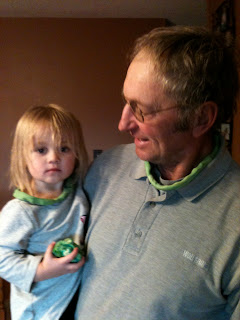 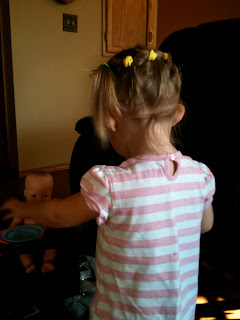 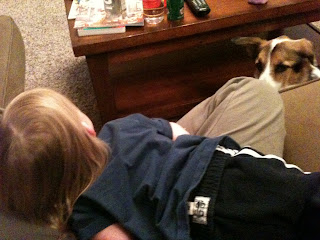 lap napper, when we're both sick, 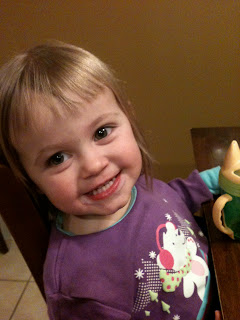 a good sport, when her mom cuts her bangs, 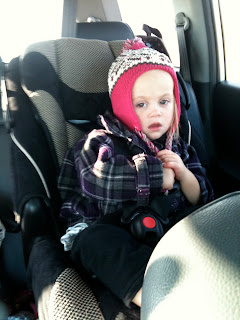 a pro at sleeping with her eyes open while sick, 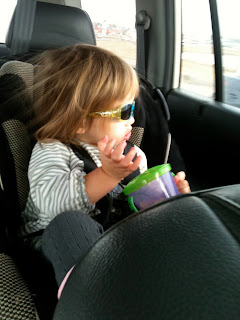 and a pretty cool dude, in general!

Now, we have nothing pressing on the horizon, a few friends that I want to make time for and a trip to the Royal Moscow Ballet's performance of Romeo and Juliet that I can't wait for, a scrapbooking/shopping date with my mom, oh yeah, and Christmas....

Posted by The Savvy Scrapbooker at 1:00 PM No comments: 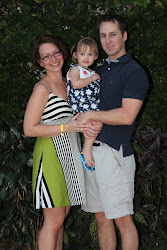